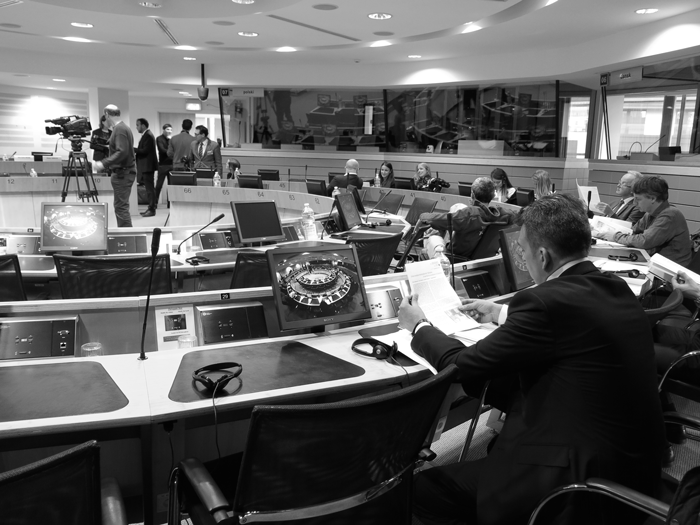 This dissemination event of the ITAN project, held in Brussels on November 12th 2014, focused on the Western Balkans.

Introduction of the event

Michel Lebrun, President of the Committee of the Regions (CoR), stresses on territorial cooperation in the Neighbourhoods. Indeed, the territorial approach of the Neighbourhood issue is of utmost importance. In this respect, the European Grouping for Territorial Cooperation (EGTC, launched by the EU in 2006) and Macro-regional strategies are excellent tools. The CoR relies on CORLEAP (Conference of the Regional and Local Authorities for the Eastern Partnership) and the ARLEM (Euro-Mediterranean Regional and Local Assembly) to exchange experiences, promote the extension of the Cohesion policy to the Neighbourhoods, and develop the territorial approach within the European Neighbourhood Policy. This is why the CoR is happy to host this ITAN dissemination event.

Ann-Gritt Neuse, representative of the ESPON Coordination Unit, stresses on the importance of cross-border cooperation with Neighbour countries. The policy context is favourable –see the Cohesion policy and Territorial Agenda, both dealing with Neighbour territories. Due to the growing integration of regions and cities in the world market, demographic, environmental as well as energy concerns and the relevance of infrastructure links enhancing connectivity and accessibility of places, a wider territorial perspective is inevitable. This is why the ITAN project, its findings and territorial evidence are of such high relevance, highlighting potentials and challenges and identifying comparative advantages.

The Scientific Coordinator of the ITAN project, Pierre Beckouche (CIST), underlines why the Neighbourhoods have become such a key issue. This is due to the regionalisation of globalisation, with the strengthening of several large region associating developed and developing countries. In the European case, an integrated vision of the region encompassing the EU and its Neighbour territories is lacking. Hence the goals of ITAN: setting-up a sustainable local database compliant with European databases, and providing policy orientations toward a deeper regional integration.

Emmanuelle Boulineau (CNRS / EVS) shows how relevant ITAN database is, when it comes to accurate demographic data –which international or national official databases do not always provide, because of the complex backlash of Yugoslavian wars. She also points out the fragmentation of these countries: internal integration of Western Balkans is a prerequisite to any successful integration to the EU; the latter should help at it, in particular thanks to territorial projects.

Gerard Schumann-Hitzler, Director at DG Enlarg, confirms the Western Balkans internal integration issue, both technical (infrastructure) and commercial (Central European Free Trade Agreement). If Yugoslavia had not fallen apart, it would probably be an EU member today. The current territorial issues there have much to do with structural reform, decrease of the –very high: almost a half– informal economy, standards and norms closer to EU’s. Macro-regional strategies (Adriatic, Danube) are an excellent way for that. The need for comparable local data is strong if one wants to design, implement and monitor such territorial projects on the long term. The new thinking in DG Enlarg is to take a longer time to let applicant countries adopt the acquis communautaire, rather than accelerating premature membership. When it comes to Western Balkans, positive steps are the Energy community between these countries and EU, improvement of the CEFTA, on-the-ground cross-border cooperation successes, actual structural reforms, and the active role of the EBRD.

What does ITAN tell us about the Ukrainian territorial stakes?

Pierre Beckouche shows the major findings of the ITAN team. Clearly the Eastern part of Ukraine contributed highly to the modern national-building era but (i) remains the major source of export (namely toward Russia) of the country, (ii) gathers the most important taxpayers despite declining wages, (iii) sends its youth to the capital region and suffers from depopulation. The Ukrainian / Russian conflict create there a jaws effect.

Irnerio Seminatore, President of the European Institute for International Relations (IERI), focuses on the manifold Ukrainian crisis: crisis of the Ukrainian politicians and of their EU and Russian counterparts collectively unable to set up a win-win partnership; international crisis both political and military, which EU hardly tackles. The crisis weakens the political and moral position of the EU.

Serguey Saïenko, Counsellor at the Mission of Ukraine to the EU, considers ITAN a very valuable platform for present and further territorial analyses and projects. He declares himself ready to help for further elaboration on the Ukrainian case. Some of the issues raised by the ITAN project such as fiscal decentralisation are under discussion along with the CoR.

Gilles Lepesant (CNRS / CERI) is also available for cooperation in the Ukrainian analysis, in particular when it comes to data on the “belonging feeling” in the Ukrainian regions and on the so called “Ukrainian nationalists”, which are questionable.

Jean-François Drevet, former member of DG Regio, confirms: in the Neighbourhood we rather have a “circle of fire” than a “circle of friends”. The European Neighbourhood Policy is stalling. Further enlargement are postponed, many Neighbour borders are uncontrolled. The very purpose of the ENP –transferring the acquis communautaire without membership– is at stake: a less ambitious objective should perhaps be elaborated, yet the territorial side of the acquis should remain as a good platform of cooperation with neighbour countries.

Sinisa Trkulja, from Serbian Republic Agency for Spatial Planning, asserts that ITAN is of major interest. Many things about Western Balkans remain unknown in the EU. Territorial analysis and cooperation bring useful knowledge and confidence. In particular, local database are of utmost importance for further collaboration. He warmly supports the idea of a “Neighbourhoods Territorial Agenda”, enhanced by ITAN.

Other ITAN findings and feedback from the participants

Pierre Beckouche presents ITAN main achievements: (i) the first step of a sustainable local database compliant with EU databases; (ii) a comprehensive view of the wider region, namely thanks to maps of energy networks, transports networks and accessibility at the scale of the whole region; (iii) an assessment of the regional integration between Europe & Neighbour territories, namely thanks to innovative composite indicators (Local International Openness, Local Human Development Index, etc.); (iv) recommendations for territorial cooperation. He also emphasises what remains to be done in order to complete the ITAN local data collection, and the need for a partnership gathering Eurostat, national statistics bodies and researchers so as to promote local data harmonisation for the wider region.

Patrice Bergamini, Head of the Division Regional Policies for Southern Mediterranean at the European External Action Department, agrees on the importance of cooperation for local data. The Union for the Mediterranean might support that kind of initiative. In the political field of the Neighbourhoods, he emphasises three points: (i) the coming years will be difficult for Neighbourhood policies, due to political turmoil and economic difficulties; solution are thinkable but hardly feasible. (ii) The ENP will be reformulated next year, with more pragmatism and visibility, and a lesser focus on the acquis communautaire. We have to acknowledge that aid amounts from the Gulf States are very high, compared to that of the EU. (iii) Good news is that the UfM is boosted: its Secretariat general has been reorganised, many inter-governmental meetings have been held during the last year, several projects with a territorial component have been supported by the UfM –which proves that ITAN is on the good track.

François Massoulié, Head of Euro-Med and Middle-East at the Directorate Regions of the European Parliament, agrees and explains that in Mediterranean uncertainty, what is at stake is to identify the structural trends, challenges and opportunities: a necessary improved mobility, sectoral opportunities for business, a need for a better civil protection –linked to a renewed migration policy because the rise of illegal people crossing the Mediterranean, since the collapse of the Libyan regime, is not acceptable.

Gilles Lepesant thinks that the ENP will be clearer if it better differentiates Eastern and Southern Neighbourhoods. Furthermore, the Southern Neighbourhood should be analysed in its link vis-à-vis sub-Saharan Africa. Bergamini agrees but wonders where to place Turkey, which plays a leading role for both Southern and Eastern Neighbourhoods. Another connection to take into account is that of the Gulf States vis-à-vis the Near-East. Massoulié also agrees on the necessary larger scope: Eritrea in a way belongs to the European Neighbourhood in the broad sense. Jean-François Drevet agrees on the necessity to reformulate the ENP so as to make it more efficient, and to increase its budget since it is very limited. Bergamini insists on the European values that this reformulation might take in higher account.

Lewis Dijkstra, Deputy Head of the Analysis Unit of DG Regio, supports the idea of an international cooperation between European and Neighbour countries in the field of local data harmonization. Maybe the funding could come from EuropeAid. Trying to involve Eurostat would be a good idea but it will not go beyond official administrative data. Among issues that such cooperation should address, the urban issue is one of the most relevant, along with environment (water, air quality…) and transport networks. The suggestion of a “Neighbourhood Territorial Agenda” is relevant if it is not a simple discourse nor a top-down blue print, but a genuine partnering process with neighbour countries.